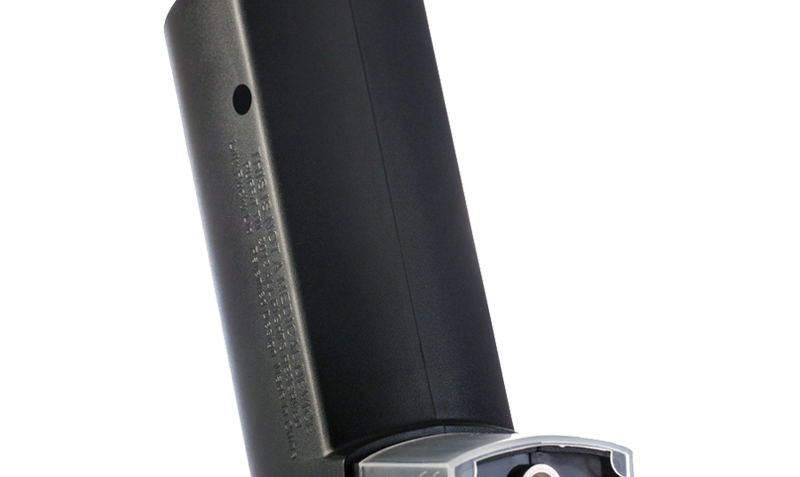 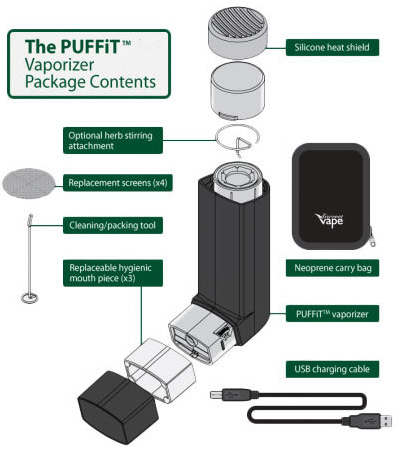 Puffit is known for its ease of use and camouflaged ‘inhaler’ design. This alone, irrespective of any battery life issues, smells or whatever makes the Puffit portable vaporizer a landmark in portable vape design.

The silver cap on top twists off to reveal the chamber, rimmed by a silicon seal that was widely attacked as a source of the chemical aftertaste on the Puffit’s release in the summer.

The manufacturers have since changed their supplier and upped the grade of silicone used, and although they recommend using the device once with a neutral herb, I forgot and went straight at it – but noticed no nasty odor. Nor did any of the folks I shared it with. I do accept that some people are very sensitive to this though. As a smoker myself, I’m not.

I will add though that the Puffit is one of the least smelly portable vapes in operation. In terms of herb odor, it was more discrete than the Pax or DaVinci I also tried for a few days. There was no odor seepage when it was not in use.

Loading the chamber is as easy as can be (finely ground recommended). The cap twists back on, and removing the magnetic cap over the mouthpiece turns the unit on. Sliding the mouthpiece half way off reveals the USB cable socket on one side and the heat regulator on the other.

Push the mouthpiece back and the magnetic cap snaps back on, turning the device off. This is very neat. You push firmly on the lid for 2 seconds (a slight ‘click’ is heard) and the red LED starts to flash slowly. When it turns green, it’s Puffit time! I tried the herb sample on an ‘8’ but found that too scorch; a ‘6’ worked better. And I must say the hit was pleasant. I felt it in my lungs and the effect was rapid. I took short puffs (not big gulping breaths – it’s not a real inhaler after all!).

And heating is quick! Like, 30 seconds, ready to use. The Puffit has a unique proprietary heating system, from the heater itself to the gold plated micro-hole chamber wall. I did have it explained to me what was good about the heating and why the gold was not a gimmick but am not technically minded enough for any of it to have stuck. But I did notice how easily and completely the used herb was cleaned out.

Some feedbacks suggested it was difficult to get good thick clouds of vapor with the Puffit. The makers took this on board and created a solution. A spring (or “vapor enhancement thingy” as they dubbed it) to fit inside the cap to press the herb load down lightly and increase contact with the hot chamber wall.

It’s now included with every Puffit and those who already own one can request one (free of charge).

So, to the stealth or ‘discretion’, if you like; definitely the big talking point of this ingenious design. To be fair, this is not such a factor. Here the main stealth concern is not from the cops but from curious bystanders/freeloaders and over-zealous bar staff .It will certainly pass a casual inspection, especially the blue version, even if it is bigger than an inhaler and is not used in the same way. I’ve read reports of users hitting theirs in the line for the bathroom, on ski lifts, at concerts and even in airplane toilets. But all without so much as a second glance.

Just don’t get complacent and rely on it looking like an inhaler if you live anywhere where a false sense of security can land you in deep do-do.

·         Heating temperature is coated with gold and makes the use of multiple heat sensors for more high degree of temperature accuracy.

And that’s all there is to it as far as I’m concerned. Really easy, nice to use, ingenious design, universally appreciated .I used the Puffit for only a few days and did not experience the dissatisfaction I later read about on the user group boards (smell, lack of clouds, poor battery life).

But I never really tested it in ‘field’ conditions. Yes, it ran out of juice the first night I used it but I was handing it around and was not counting how hard it was being used. It ran out again when I’d barely used it and did not have enough battery in my laptop to re-charge it.

I’ve seen figures suggesting 8 x 10 second draws on a charge, which sounds about right. Not enough? Get a bigger vape! Or carry a small, cheap USB charger (costs about 20 bucks and holds enough juice to replenish the Puffit at least twice). As all vapers-on-the-go appreciate, I hope: there’s always a trade off.

The battery could be better, but at this size and price point I think you’d be asking for too much. Yes, the Pax has a stainless steel vapor path as opposed to silicone on the Puffit, if that’s still an issue to you. But it’s $100 more. The silicone parts can be replaced quite easily (a single small star head screw opens up the guts) and this has been reported as solving taste/smell issues for some.

The only serious issue that left me worrying was a lack of consistency in longer-term usage. Sometimes it would deliver good vape, other times not (I hear). That’s not something I could evaluate in the 4 days I had it. This inconsistency has led to mixed reviews to date.

Another recent addition is the silicone cap to fit on the metal chamber cap. This too is a useful adaptation thanks to user feedback – the cap does get very hot after being used. The vapor pathway of Puffit is constructed from medical grade silicone and you can seriously taste it. Every hit comes seriously tasting like hot plastic. It is a bit gross and disturbs at times.

Reading around, there does seem to be a bit of a knack to getting best results from the Puffit (to be fair, as there is for so many other portables). Shaking between hits, opening and stirring the load, not allowing the device to cool between hits are some of the suggestions I recommend.

I fell for this design big time and after a few days was still enamored by its stealth, ease of use, and great price. With its neoprene carry case the Puffit fits in a jeans pocket even with the USB cable and tools. I think makers Lilly Rucky have a good attitude; a well thought out product and are in the vape game to play serious

The Puffit Portable Vaporizer is the latest portable Vaporizer manufactured by the esteemed Discreet Vape. This device appealed to me a lot when I first saw it. It is disguised to look like the contemporary inhaler so you don’t feel out of ordinary. The vaporizer has some cool features that I want to highlight! 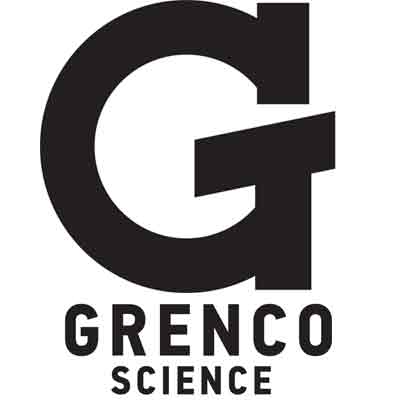